20 Best Games Like Homefront: The Revolution You Should Try in 2022 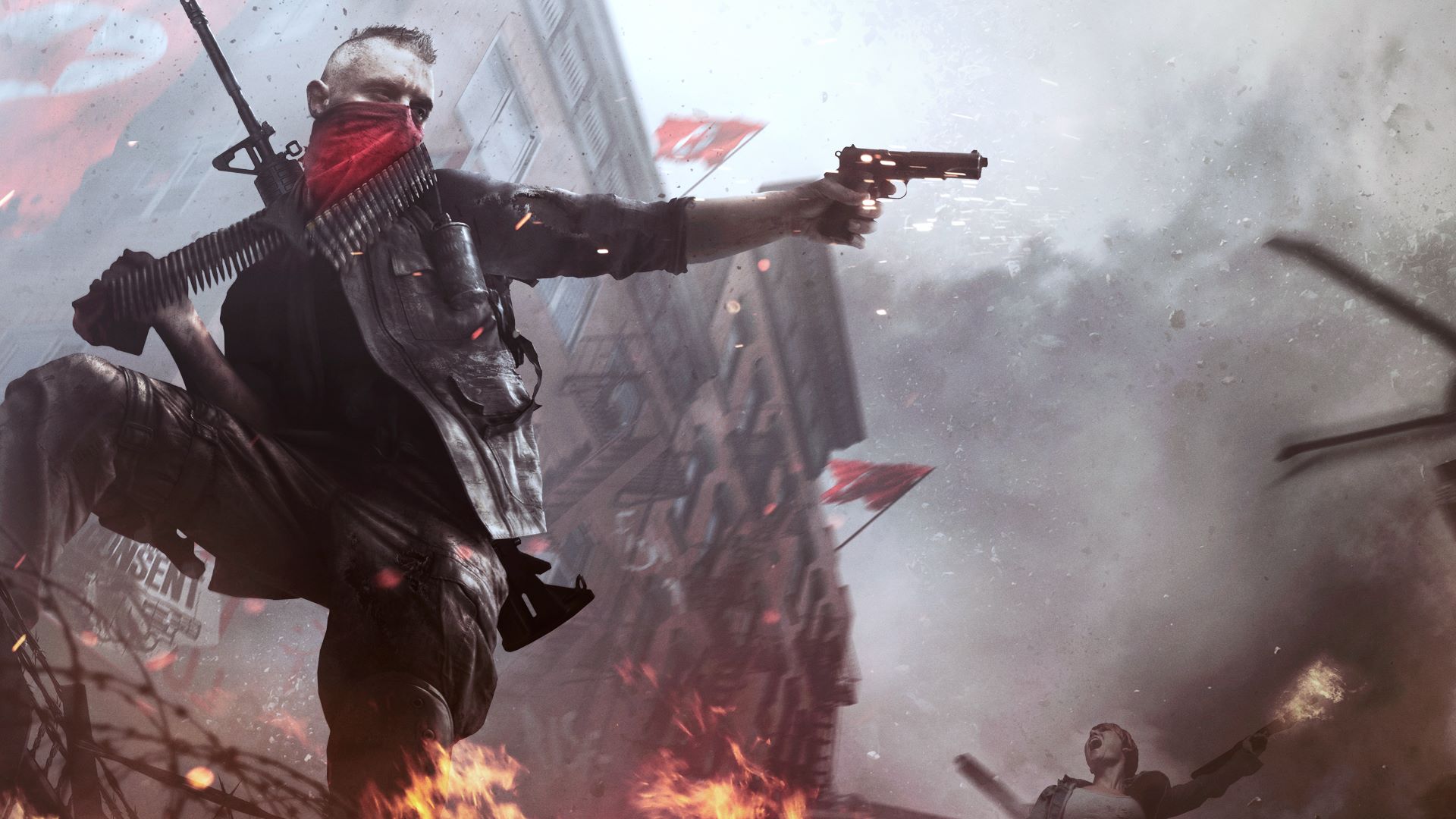 You, as Dr. Gordon Freeman's best friend, were last seen leaving City-17's train station with citizens before Citadel erupted amidst a storm of unknown proportions. You must battle against Combine on streets of City-17, give Gordon Freeman back his crowbar and be ready for unforeseen consequences.

Portal 2 is a first-person puzzle game developed by Valve Corporation and released on April 19, 2011 on Steam, PS3 and Xbox 360. It was published by Valve Corporation in digital form and by Electronic Arts in physical form.
Its plot directly follows the first game&#39;s, taking place in the Half-Life universe. You play as Chell, a test subject in a research facility formerly ran by the company Aperture Science, but taken over by an evil AI that turned upon its creators, GladOS. After defeating GladOS...

Wolfenstein: The New Order is the ninth instalment in the Wolfenstein franchise. A first-person shooter with a primary target - killings Nazis. You play as Captain William Blazkowicz in an alternative universe in 1946. You and your friend Fergus Reid are attacking the castle of General Wilhelm &quot;Deathshead&quot; Strasse, who&#39;s the main villain of the game. When the attack goes completely wrong, you have to help Captain Blazkowicz in getting rid of the Nazis in the USA. The games core mechanic...

Far Cry 5 is an open-world adventure first-person shooter developed by Ubisoft Montreal. It is the fifth main installment in the series.
Welcome to Hope County, Montana, where a violent religious doomsday cult appeared. You play as a junior deputy sheriff who gets trapped in the Hope County as all the ways out the county are now patrolled with cultists and all external communication is cut off. It is your job to free the county of cultists.
For the first time in the series, the game features a character...

Call of Duty Black Ops III is a science fiction first-person shooter, the twelfth game in the whole Call of Duty franchise and the third chapter in the Black Ops series. The action begins in 2065, 40 years after the events of the second part, so the game has several historical references. However, the game is not a direct sequel to the previous Black Ops game. Players are offered to assume the role of a CIA special unit trooper trying to get along with the new artificial intelligence DNI (Direct...

Tom Clancy’s The Division is an action shooter in a third-person perspective with role-playing elements. The game includes both single and multiplayer (co-op) experience. Playing for The Division agent gamers will fight against the sources of virus throughout the city to save America from the terrible cataclysm. The main action is set in New York City, so players have an opportunity to explore an open-world Manhattan infected with the dangerous pandemic. According to the storyline, the disease...

Mafia III is an action-adventure game that follows the story of Lincoln Clay, a veteran who is seeking revenge for his killed relatives in the city of New Bordeaux. He creates a criminal syndicate to defeat the Italian mob responsible for the death of Clay’s family. While the game is the third part of the Mafia series, it represents a completely new story and characters, not connected to the previous titles.
The core gameplay of Mafia III is gunplay with a cover system. The game provides a wide...

The eighth Call of Duty game overall is the sequel to Modern Warfare 2 and is set in an alternate reality of the modern era. In the campaign mode, the game continues the Modern Warfare storyline about an American spec ops squad Task Force 141 fighting Russian nationalists.
The player will control different characters on various military missions across the world. The protagonists from the previous part, Soap MacTavish and John Price, appear in certain missions but are sidelined by several new playable...

Call of Duty: Black Ops II is a first-person shooter, a direct sequel to Call of Duty: Black Ops that features its protagonists. The story is divided into two time periods. It starts in 1986 with Alex Mason that has to return to work after his retirement to catch Raul Menendez, responsible for multiple crimes. The second storyline takes place in 2025; you play as David, Mason’s son, who also needs to find Menendez who sparks the second Cold War. The game has several endings depending on your actions...

Insurgency is a first-person shooter, which provides players with both PvP and co-op multiplayer experience. Unlike other shooters, Insurgency features a hardcore gameplay lacking the on-screen crosshair, health and armor indications, and mini-maps. For the more, each weapon instantly kills other players with one shot in the head and with the maximum of 4 shots in the body, which is quite realistic. As far as the action is set in the timeframes of the Iraq War, the two opposing sides are U.S. troops...

Far Cry 2 Fortune&#39;s Edition is an open-world FPS developed by Ubisoft Montreal. It is the second installment in the series.
Jump in the boots of a mercenary sent to an African country where the civil war breaks out. Your target is a notorious arms dealer that supplies both sides of the conflict. As the player arrives at the hotel, they pass out due to malaria. Waking up, you find your target standing over you, reading the mission briefing. The player is too weak to eliminate the arms dealer due...

The sequel to the game Crysis.
The army of aliens returns to Earth to destroy all of humanity. On the streets of New York, the epidemic mows people in millions. Chaos reigned everywhere, the city is rapidly turning into flaming ruins. The army and the police are powerless before the newcomers, and the only escape is an option. But if we call on the help of unique technologies, there is a chance to save ourselves and humanity. The hero is the one who has these technologies - and he fights alone, saving...

A sequel to Sniper: Ghost Warrior is based on CryEngine 3 and is somewhat similar to such tactical shooters as Crysis.
Plot
The protagonist is Cole Anderson, a gruff American ex-Marine, who accompanies a CIA agent on a mission. Their goal is to capture a group of mercenaries who are trying to obtain a biological weapon of mass destruction. The villain, former Russian spy Merinov, is going to sell the weapon to a terrorist organization that plans to provoke a nuclear war. The protagonist will perform...

Call of Duty®: Advanced Warfare, developed by Sledgehammer Games (co-developers of Call of Duty®: Modern Warfare® 3), harnesses the first three-year, all next-gen development cycle in franchise history. Call of Duty®: Advanced Warfare envisions a powerful future, where both technology and tactics have evolved to usher in a new era of combat for the franchise. Delivering a stunning performance, Academy Award® winning actor Kevin Spacey stars as Jonathan Irons - one of the most powerful men in...

You and your friends are the deadliest killers in the galaxy. Another glorious day in the Corps. Buckle up, soldier! Welcome to Aliens™: Colonial Marines. Created by Gearbox, the critically acclaimed and fan-favourite developers of Borderlands and Brothers In Arms, you and your friends will become the most badass military outfit in the galaxy – the US Colonial Marines. It’s up to you to not just survive, but wipe out the Xeno infestation. Key Features: Enlist in the Marine Corps. Bringing...

ENEMY FRONT is the first truly modern WW2 FPS, featuring stunning visuals, open-ended levels and a richly interactive combat experience that breaks out of the standard model of highly linear scripted FPS experiences, giving the player full freedom to own their playing style. Intense Combat, Sniping, Stealth and Sabotage – all are viable approaches for the player, maximizing player engagement and replayability. Against the visceral backdrop of breathtaking European locales, the player takes on the...

[ THE ULTIMATE SCI-FI RPG ]Guardians of Orion is a Sci-Fi MMORPG Shooter featuring Cooperative, Competitive, Social and Dog-fighting Gameplay![ THE LORE ]Guardians of Orion takes place half a century from now and allows you to explore The New Solar System. Rich with an unlimited and renewable clean energy source, Ion Crystals generated by the star of Rigel help power your Guardian using the most advanced technology and weaponry ever created. https://www.youtube.com/watch?v=VFopklaUqvg· EXPLORATIONTravel...

What is the plot of Homefront: The Revolution?

Homefront: The Revolution is an open-world FPS developed by Dambuster Studios. It is the second game in the series.

In 1972, a technological marvel emerged in North Korea. The APEX corporation was found. Sometime later, the North Korean technologies become more widespread than the US. In 2004 the United States began to buy its weaponry from Korea. By 2016 the United States economy is at an all-time low, the US invade the Middle East. In 2025, the US debt to North Korea grows too immense to be paid out, and the economy crumbles. While being helpful at first, North Korea's military set foot on the American soil. You become a part of the resistance based in Philadelphia in 2029 trying to set the city free from Korean People's Army.

The players have to use the insurgency strategies in order to free the city of Philadelphia from the KPA. A wide set of explosives, jammers, and traps is available to the player. It is possible to modify the weapons the player has on the go. Attach suppressors, scopes or convert your weapon entirely as you see fit.

Philadelphia is split into three zones: the Green Zone where the KPA and their collaborators live in comfort with stable electricity supply and clean drinking water; the Yellow Zone which serves as a ghetto for most of the Philadelphia residents; the Red Zone which mostly consists of bombed-out suburbs of Philly.

A four-player co-op mode is present in the game and is separated from the main campaign.