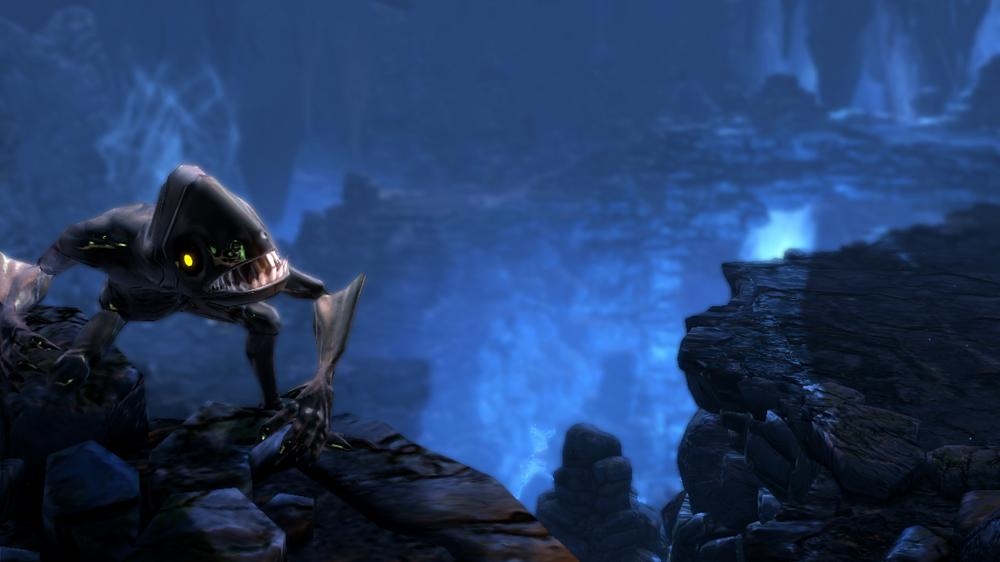 The fifth game in the series, Skyrim takes us on a journey through the coldest region of Cyrodiil. Once again player can traverse the open world RPG armed with various medieval weapons and magic, to become a hero of Nordic legends –Dovahkiin, the Dragonborn. After mandatory character creation players will have to escape not only imprisonment but a fire-breathing dragon. Something Skyrim hasn’t seen in centuries.
After Oblivion, the magic system was reworked, in order to show players more aggressive...

2. Lords of the Fallen

3. The Incredible Adventures of Van Helsing

The Incredible Adventures of Van Helsing is an action RPG with elements of the hack and slash genre and the first part of the trilogy of the same name. It tells the story of Van Hellsing’s son who continues his father’s work and kills monsters on the streets of the fictional Borgova city. There he fights against a cult that spoils the life of civilians.
You can develop the hunter&#39;s skills and upgrade his weapon and magic possession. Van Helsing Junior also has an ally, a ghost named Catherine...

This sequel to the comic dark fantasy Overlord allows the player to have fun being evil. You play as the dark Overlord who leads his armies of minions against the human Glorious Empire (which obviously mimics the real-world Roman Empire). The Glorious Empire is not &quot;good&quot; anyway: its leaders are trying to eliminate all magic users, so the &quot;evil&quot; motivation is quite justified. However, to accomplish his conquest and become a truly powerful and feared dark lord, you will have to...

Dragons: they have been hunted, they have been slain, but now the hour to strike back has come. Break free from the confines of the human body and take to the skies in this epic RPG adventure that challenges your wits and pits you against a thousand foes. Spread your wings, burn your enemies: become the dragon!
This Developer&#39;s Cut includes the ultimate edition of Divinity II, good for 100+ hours of highly acclaimed RPG gameplay, as well as the brand new Developer Mode and many more amazing extras!Key...

In the game, you can follow two storylines, depending on whether you choose a male or female character.
Both versions of the character have their own reasons to hate the leader of evil forces, Shax. If a female character is selected, his sister is abducted by Shax as a result of a dispute over the jewelry that the player was selling. In the case of a man&#39;s game, the player refuses to sell the sword to Shax, resulting in Shax killing the character&#39;s wife.
Everything else in the game is the...

In the year 2171, the world is a changed place. The countries have merged into rival super nations called U.C.S. and O.C.U. The human race started a massive push into space by building orbital elevators to set up surveillance satellites to watch over their adversaries. However, tension rises when a U.C.S. orbital elevator is destroyed by unknown forces. Dylan Ramsey, a young engineer, finds himself quickly caught in a swirl of destruction, conspiracies and crumbling alliances in a new war brewing...

Choose from over 20 legendary FINAL FANTASY characters and battle in a unique 3vs3 arena. Call forth familiar summons like Ifrit, Shiva and Odin to dominate the opposing side or to turn the tide of the battle in each match in DISSIDIA® FINAL FANTASY® NT!
Online features require an account and are subject to terms of service and applicable privacy policy (playstationnetwork.com/terms-of-service &amp; playstationnetwork.com/privacy-policy).
Network Players 2-6 - Full game requires PlayStation®Plus...

Be clever, be quick – and show no mercy.Beyond the veil of this world, there is a chain of strongholds that were once built to keep the horrors of the void at bay. And now the monsters are returning from the depths to conquer and kill: only you can stop the monsters before they break through to the everyday world. Choose your hero and defend the silent forts: use, rebuild and improve those ancient traps and magical machines. Deathtrap is a Tower Defense game with strong action-RPG elements, a game...

Enter a majestic wildland, sundered in a war of the gods. Here stands an army of giants, ready to crush the human realm and plunder its ruins. Against them stands a mighty wall, guarded by the hardest warriors, deadliest assassins, and greatest mages humanity has ever seen. As a new recruit, your mission is clear as it is mad: Venture into the Sundered Lands, rise through the ranks of your mercenary company, and become a giant slayer.An expanded and enriched version of the hit RPG Ragnarok Odyssey,...

Meet Your Maker
Lilith has returned to Sanctuary, summoned by a dark ritual after eons in exile. Her return ushers in an age of darkness and misery....

13. Dungeon Siege 3: Treasures of the Sun

The SoulKeeper® VR is an episodic dark fantasy Virtual Reality Role Playing Game. Experience the immersive world of Gerindak, filled with lore and adventure, as you play through the intertwining stories of various characters. Start off as Isoropos, a warrior monk, member of the ancient monastic order of the Lavordians as you embark on a dangerous quest to investigate rumors surrounding the Mardonians, the hated rivals of the Lavordians. Engage in combat wielding your sword, casting ferocious spells,...

The Shield Maiden, as with all mortal Norsemen, was to have her fate determined by the three fate-weaving Norns and their sacred loom before she even entered the world. However, her destiny was shattered when the mischievous god Loki interfered, dripping spots of the wretched substance Eitr into the unwoven loom, forever altering the Shield Maiden’s path and engulfing the great tree Yggdrasil in darkness. Now the Shield Maiden must venture into the nine Norse worlds connected by Yggdrasil and unravel...

What is the plot of Dungeon Siege 3?

In Dungeon Siege III, 150 years have passed since the ending of the original Dungeon Siege. Some 30 years ago, a woman named Jeyne Kassynder led the rebellion and took over the power in the fantasy realm of Ehb. Kassynder framed the heroic 10th Legion, featured in Dungeon Siege, for the murder of the king, and nearly annihilated them.
The player takes the role of an heir to one of the last surviving Legion members. There are four possible protagonists with pre-scripted backstories to choose from, and the main plot will slightly differ based on your choice. However, regardless of which character you choose, the other three will eventually appear in the game and can be recruited to accompany the player, one at a time.
Each character has his or her unique set of skills and attacks. For example, Lucas, a knight, can withstand heavy damage in a melee fight. Katarina prefers ranged weapons and a little magic. Anjali is a shape-shifter who is a combination of both, depending on her current form, and Reinhart is a classic magician who uses energy spells. The controls are very different from the previous parts: the point-and-click approach was scrapped in favor of arrow keys and attack buttons.